Perry Falk, president of the Perry Auto Group and Perry Ford in National City, has announced the acquisition of the McCune Motors auto dealershipon the National City Mile of Cars for an undisclosed sum.

The dealership, on a ground lease is at the corner of 24th Street and National City Boulevard, is now called Perry Chrysler-Dodge-Jeep-Ram.

“We are very excited to add the McCune dealership to the Perry Auto Group family,” said Falk in a statement.

“The facility is at a good location along the Mile and has a strong parts and service department. I feel fortunate that that Tony McCune agreed to sell to another dealer along the Mile of Cars,” Falk said.

The acquisition ends a 65-year history of the McCune name on the National City Mile of Cars Dick McCune, father of Tony McCune, opened a Chrysler dealership in National City in January 1948.

“It’s bittersweet, but there comes a time in your life to let go,” said McCune. “Perry is a good man, and he’ll do a great job.”

As a young man during school vacations, Tony McCune washed cars at his father’s dealership. By 1970, he had worked his way up to the position of general manager and was given control of the business in 1973.

Falk said he approached McCune last year about selling his dealership. Falk has owned auto dealerships in San Diego County since 1995. He became an owner on the Mile of Cars in October 2002 after purchasing what was then called National City Ford.

“It’s a good time right now to be in the auto business,” said Falk. “We’ve got pent-up demand because consumers want to replace their aging cars and trucks, plus we’ve got affordable auto loans, attractive new vehicle designs and all the latest technology innovations in the new vehicles. I’m expecting a solid sales year.” 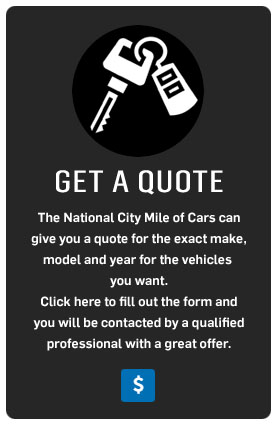